We decided to hike to hole in the wall. For R80pp you get a guide to show you the way, a toasted sarmie when you get there and a lift back to the backpackers when you are done. Sounds good and how bad can 9km along the Transkei coastline really be? Besides, we needed fresh air without petrol fumes.

Off we went and after the first hill I thought this is not so bad. The uphill was followed by a steep downhill and then even steeper uphill. This continued consistently for 9km with the only apparent difference being that the hills became mountains. It reminded me of this book I read when I was 6 called “What is behind the hill?” It started of with a kid that is curious to see what is behind the hill in his backyard only to find that there is another hill. He is then again curious to see what behind that hill is and when you turn the page….

….it is another hill. The book continues this way for about 10 -15 pages, always just another hill behind the previous one. It ends with a scene similar to that of the valley of a 1000 hills. I have no idea what that book was suppose to teach you but I probably read it about x100 just to see if there is a different ending or if I could find some meaning to it – there never was and I never did. So as I am hiking up the one hill and down the other, I really hoped that the ending will be worth it. 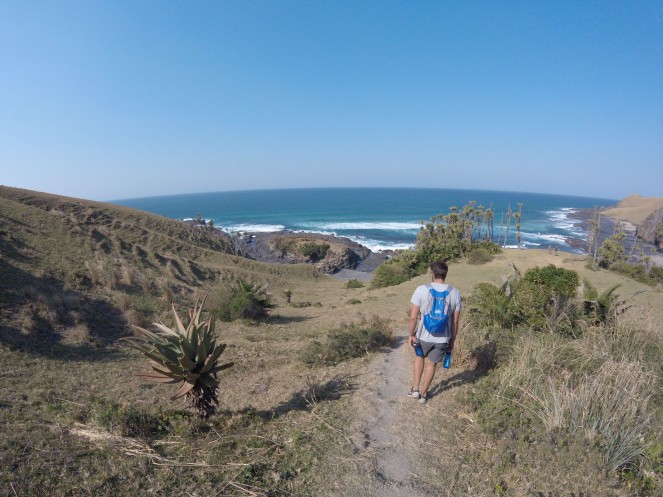 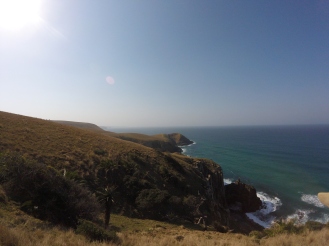 Baby hole in the wall

After about 2 hours of following goat footpaths the guide told us it is just another hour and then we will be there. In his words: “You see that hill? No, not that one, the one behind that one. Yes, just 5 hills after that one we will be to see the hole in the wall”. I thought I was going to die. The only positive thing was that the strong wind and hot, blazing sun dried my tears faster than what I could cry them.

Head down, one foot in front of the other, we finally reached the last hill – and there it was: the big rock with a hole in it. One last steep descent, a quick walk through the village and there we were. 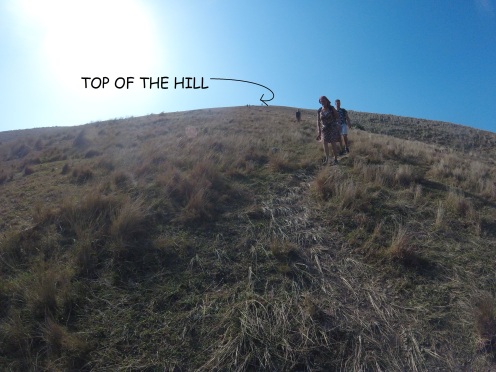 It is pretty impressive and beautiful but the real reward was the hot braaibroodjie (that I had to share with a stray dog) and power-aid.

For the next 45 minutes we just relaxed, took photos and rested our now blistered feet. The cold wind, that got progressively colder as we hiked, made it a bit too cold to swim – although Clayton did go for a quick dip.

When we got to the taxi that will be taking us and our fellow hiking buddies home to hot showers and beds, it already reached its maximum of 14 people. It was just our luck that we found the only taxi in South Africa that did not believe in overloading so we had to stay behind and wait for it to drop the others and then come back to fetch us. We took our seats on an embankment that I would previously have described as a hill but after today’s hike my perspective of hills have changed a bit.

We spent an hour sitting next to the road, watching people and life stroll by, nothing that we can do but wait and watch. We hinted to our guide that we should go to the local shebeen while we wait but he was either a non-drinker or felt that his reputation would not survive being seen at his local hangout with 2 sweaty whiteys (we saw him later that night with a beer in hand so at least that mystery is solved…).