We were toying with the idea of staying another day in the greater Vilanculos area in order to go to Santa Carolina Island (also known as Paradise Island). However Clayton and I had to remind ourselves that we are on a tight budget and that one amazing island day trip in Mozambique is better than nothing. We still had Zanzibar to look forward to and also Likomo Island in Malawi. Therefore, after 3 weeks in Mozambique we decided that it was time to say goodbye, besides Malawi was calling us.

We were undecided as to which route to take to Malawi. The safe option was via Inchope to Tete, entering at the Zobue border. Option 2, the more off the beaten track route was via Inchope, Caia, Morrumbala, entering Malawi at the most southern border at Marka. This route involved a ferry crossing which added to the appeal. The deciding point was Inchope and we agreed to do some research on the road about option 2, specifically the ferry and its condition before committing to a road.

In the early hours of the morning on our day of departure a very confused rooster started crowing and woke up the entire neighbourhood’s dogs, other roosters, children and us. Unable to fall asleep with the cacophony surrounding us, Clayton and I started to pack up camp, confused as to why everybody else was still able to sleep through the noise.

We did not even make it out of Vilanculos before we were stopped by our first roadblock. Car registration and insurance documents as well as driver’s license and passports. This guy was thorough and a slight pain in the ass since all the documents were stored right at the bottom, below all the bags which meant it turned into a casual car search while we unpacked everything. This mistake will not happen again (it did, a few times more). We must have given the impression of being very honest potheads because the cop outright asked us if we had ganja. Confused as to whether he actually wanted some for himself or if he intended to bust us, we gave him the disappointing answer in both scenarios: No. Content with this answer and happy that we were telling the truth, he asked if he could buy Bertus. Again we had to give him the bad news, sadly Bertus is not for sale.

The second roadblock was as we turned onto the N1. Blinding us with his smile, the cop appeared from the bushes and indicated that we should pull over. He did not even act as if this was an official stop, immediately asking whether he can buy Bertus. He was slightly more adamant and would not take no for an answer. It was only when we said we will be back after our trip that he willingly let us go.

Matt had a different approach to dealing with the cops. Where we would dangle the possibility of selling Bertus, Matt was complimenting them by telling them how good they looked for their age and how amazed he was at the few wrinkles. This also seemed to do the trick and we hardly had any issues. 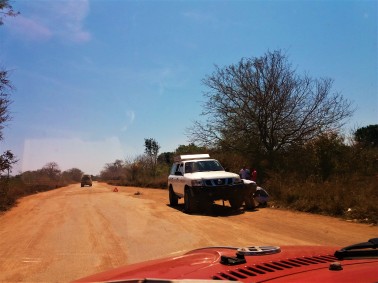 Bushveld replaced the tropical landscape that we have grown accustomed to during our 3 weeks in Mozambique. Coconut trees became less and beautiful, majestic looking baobabs appeared more frequently. Along with the distinct change in landscape came the potholes that we have been warned about. Driving with one wheel on the gravel next to the road and the other on the patches of tarmac, we slowly made our way north. The drive soon became a game of chicken with very unwilling participants. Each game was nearly always won by whoever had the bigger car or the least amount of respect for their car. This meant that trucks and buses virtually always won.

The rules of the road seemed to disappear along with the tarmac. Passing cars on the left seemed to be the safest but if you were brave enough you could stick with the keep left, pass right rule. You however need to keep in mind that as you are passing a slow moving vehicle, said vehicle may at any given moment swerve right to miss a pothole while you might want to swerve left to avoid the one that appeared as if by magic in your intended route. In addition to the erratic driving of the one being passed, you might also find yourself being overtaken by some idiot in a red BMW that, no matter how many times he passed us, we would always end up in front of him a couple of kilometers further.

Small kids next to the side of the road has taken advantage of these potholes, filling a couple of  them with sand as you approach and then ask for money as you inevitably slow down to dodge the ones they did not fill. The very small ones have unfortunately not totally grasp the concept and merely throw hands full of dirt into the air that create a dust cloud that then hide the actual potholes.

Our third roadblock for the day was about 200km after the previous one. After a couple of inaudible grunts and gestures we realized that this cop also wanted to buy Bertus. I might be stating the obvious or shooting myself in the foot but I am definitely seeing a great business opportunity here…

After covering 400km that day we reached Inchope and the small roadside motel late in the afternoon. Regardless of which route we decide on, we had to get up early the next morning and after looking over all the maps and info gathered yet again we went to bed early. Leaving the tough decision for the morning. We still had no reliable info on the ferry after Phinda and struggled to get info in general on our intended route via Morrumbala.

We again woke up at an ungodly hour. The speaker for the the Muslim call to prayer felt like it was inside our room. We admitted defeat and got up. Over peanut butter and banana sandwiches we again went through the pros and cons of both routes. Marcia and I was keen for Morrumbala while Matt and Clayton leaned towards Tete. However, neither group was completely convinced with their own arguments to take a specific road. Tete just seemed like taking the easy way out while Morrumbala was just a bit too off the beaten track and the lack of info was a concern.

It all came down to a flip of a coin. Clayton took out a coin that appropriately had a male on the one side and a female on the other. Should the male be on the top we would take the Tete road and if it was female, we will go see what the ferry looks like. After the ground rules were established for the coin flip and we all agreed that we will obey the coin no matter what, Clayton threw it in the air and it landed on the ground: Male on top.

The answer was clear: we will be taking the Morrumbala and ferry road!