The Mozambique/Malawi border crossing again met our expectation of immediate change from one country to the next. The lush green tea plantations was a sight for sore eyes after the grey, dry landscape we’ve seen in rural Mozambique. The impressive Mulanje mountain towered above the plantations, casting a cool shadow over everything which caused welcoming relief from blazing hot sun that turned the car into an oven the last couple of days 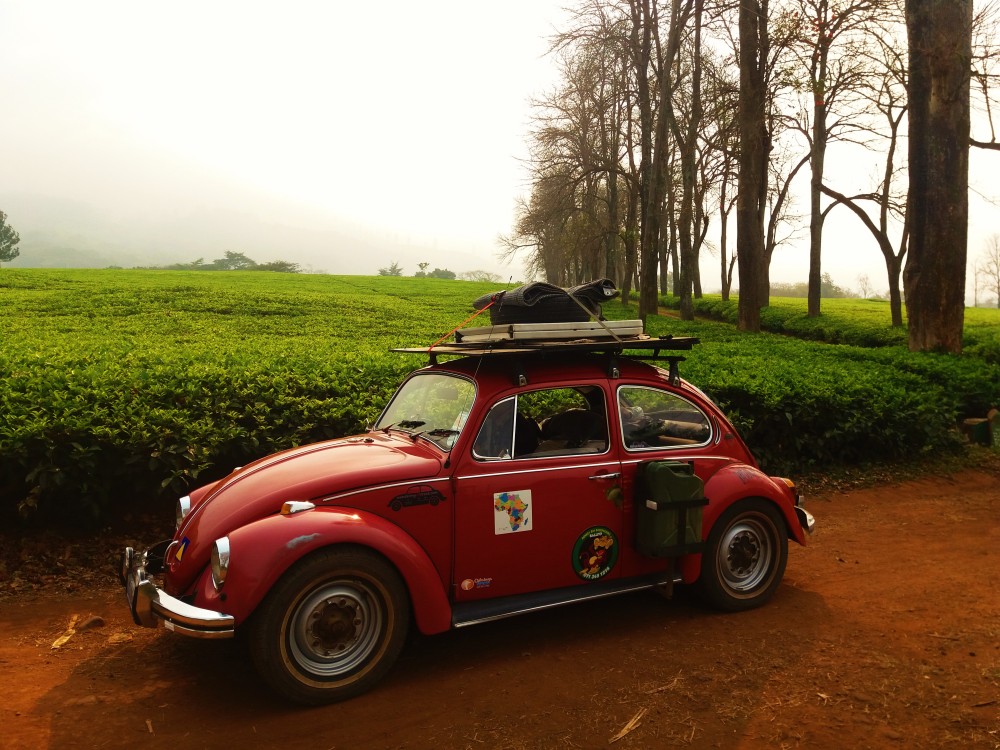 We spent 2 nights at the Mulanje Golf Club (in Malawi most golf clubs offer camping – can you imagine pitching up at Bryanston Country Club asking to pitch you tent!). The chef made the most delicious vegetarian curry served on Malawian rice which totally lived up to my expectations. I can now understand why my mom is holding our dogs ransom for a bag of rice – it is fluffy but sticky at the same time. Impossible to describe.

Spending 2 nights also meant that we could do some much needed laundry. Up till now we have been hand-washing our clothes and we both agreed a machine wash was necessary. For a small donation the guys at the golf club did our washing while we went to the local hotel for lunch and a swim.

Our next stop was Mulanje campsite. We did a quick restock on some necessities and since I did not feel well we also took a trip to the local clinic to buy Malaria cure pills and testing kit. Everyone told us that as soon as you feel flu like symptoms you need to start a course of Coartem. 1 test kit later, my Malaria turned out to be just a mild case of hypochondria.

From the town to the campsite was about 35km – the shortest distance we have had to travel between stopovers. We spent another 2 nights there to allow those with too much pent up energy to do a hike to the waterfalls. Despite nearly 15 guides offering their services to take the others to the waterfall, they ended up with a “guide” whose English vocabulary consisted out of just the word ‘yes’. Everything they asked him received a nod and yes as answer. We suspect that he was the cleaner at the camp who got himself into the situation by being at the wrong place at the wrong time when they asked the receptionist for a guide – he might also be her husband. He still made R180 for 3 hours work which is not that bad for him but a total rip off for the guys. I on the other hand spent my time updating the blog and nursing my unknown disease. 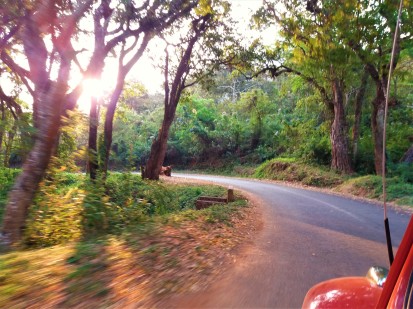 I also had my worst experience to date on this trip in Mulanje. I woke up in the middle of night with what felt like water bubbling in my ear. The bubbling turned to scratching and squeaky noises and I started to freak the fuck out (no, there is no other way to describe it). An insect crawled into my ear canal and it was now also freaking out. I woke Clayton up – poor guy thought we were under attack but he responded surprisingly fast, getting out of bed, rushing to the car, looking for ear drops. While he was busy ransacking the car, I started to picture this insect eating my brain. I realized that me freaking out is not helping the situation so I tried to relax, lying on my side, relaxing my jaw which in my mind will then relax my ear canal so that this thing can get out. So with silent tears making their way down my cheek, dripping onto the pillow I patiently waited. After a scratching, screeching, tickling couple of minutes (which felt like an eternity) my patience paid off – I could feel the insect making its way out. I had to restrain myself to not try and pull it out the closer it got – just in case I push it back in further. Another couple of anguishing minutes later I felt it walking out, crawling over my earlobe then neck before disappearing. I still do not know what it was…

Because we apparently did not spend enough time on dirt roads the guys decided to take the road less traveled to Zomba the next day. I was seriously looking forward to smooth tar but I got outvoted by Clayton, Matt and Marcia. But, after an hour of sulking, even I had to admit that it was worth seeing the rural side. People were friendly, smiling, waving and despite being dirt poor (Malawi is one of the poorest countries in the world) they seemed driven and determined to make the best out of a bad situation.

Bicycles are the main form of transport acting as taxis and cargo carriers. Bundles of wood, goats, pigs, chickens etc. are precariously stacked and transported in all directions.

We took a detour to lake Chilwa – one of the 3 large lakes in Malawi and the one with the least amount of info available which meant we just had to go and see what it is all about. As soon as we arrived we realized why there is no info – there is really nothing to get excited about. I did however get a couple of cool photos of doors for my collection – much to the locals’ amusement.

In Zomba we stayed at Cassa Rossa which is managed by a very friendly Italian couple. The lodge is perched halfway up the Zomba Plateau and I can imagine that the view must be quite spectacular when the air is not filled with smoke from veld fires. Since we had to be in Blantyre in 4 days time to pick up Marcia’s mom we stayed there for 3 nights.

Day 1 was spent in town going to the vibrant market where we got delicious, healthy looking veggies. Massive zucchini, eggplant, green peppers, avos and green peas (difficult to take photos because the people take offence if you do) – it was the first time since leaving South Africa that I again felt inspired to make food. The meat selection in the local Shoprite was unfortunately a let down but we still bought a small frozen chicken which we braaied that evening. We will just have to stick to Soya chunks – a surprisingly yummy alternative to meat. You get used to the soil taste after a while.

Day 2 even I admitted that it is time to actually do something so we went to explore the plateau. Again, the views could be breathtaking was it not for the smoke. Most of the trees on the plateau itself have sadly been cut down for firewood, leaving only a tiny section around the river and dam. 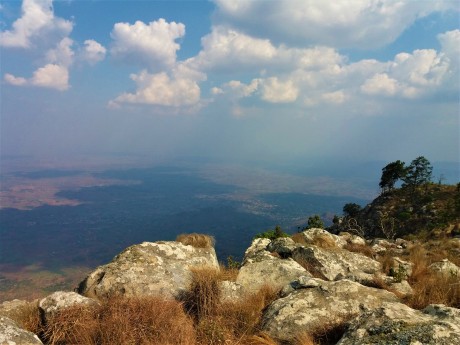 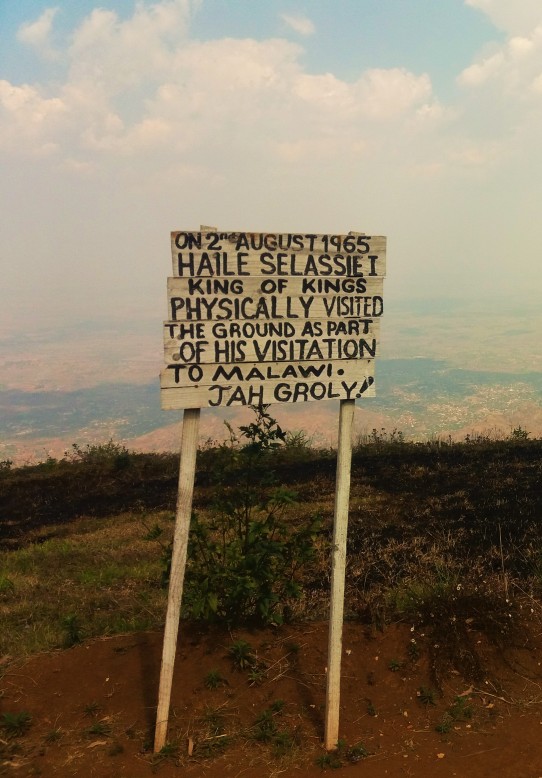 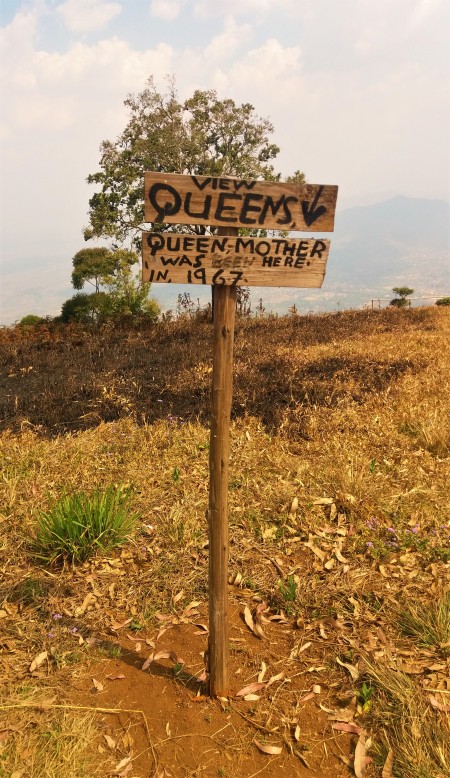 Blantyre was just another city as expected but at least it had a Game and Shoprite were we could buy items we normally would not be able to find in the local shops. This however meant that we spent way too much money on luxuries than we ought to including two bottles of wine (a brand that would not be more than R30 in South Africa sold for R60 in Malawi). The wine tasted like vinegar… 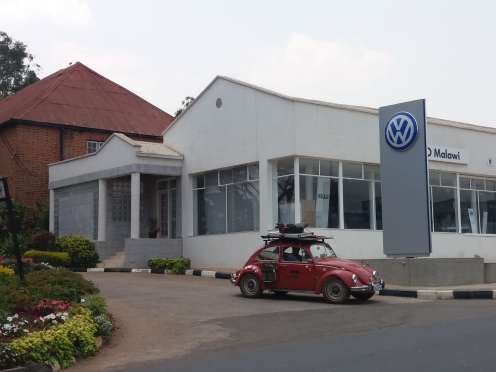